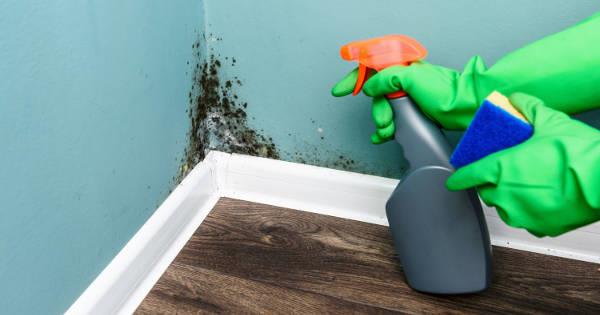 Mould is an unpleasant fungus that can grow on your interior walls, ceiling and even spread to furniture and other fabric. Commonly in the UK, mould is rife on walls of poorly maintained housing manifesting as ugly black patches covering internal walls destroying any previously decorated wallpaper and fittings.

The worst cases of mould can make the inside of your home look like a horror movie set. As well as being unsightly there are potential health concerns related to mould as it can aggravate respiratory problems like asthma.

So, what are the main causes of mould?

Simply put, moisture. Mould will form in moist conditions, so any home suffering from damp conditions is at risk of mould colonising the walls and other places. And mould truly does like to colonise, once you've got mould it can spread to all the other damp moist places it can find.

Condensation is a usual suspect in damp conditions in any home; condensation is caused when cold surfaces meet the water droplets held in the air and forms in places like windows, mirrors, the walls of your rooms and behind furniture.

I don't like the sound of this, what can I do to prevent mould and condensation?

Ventilating your property is one of the most important steps in ensuring you don't suffer from condensation, and the easiest way to ventilate is just by opening your windows...

Hang on, I hear people say ventilation is important, but what does opening my windows actually do?

By opening a window, the moist air in your home is replaced by drier air from outside. You’re basically letting those little water droplets held in the air escape elsewhere.

So, make sure you are ventilating your property, particularly after showering or cooking time. Cooking time produces a lot of moisture so open a window when cooking or, if you have one, turn the extractor fan on! When you're showering you are obviously emitting a lot of water into the air (or you've been doing it wrong all these years...) so crack open a window and shut the bathroom door to stop the moisture escaping to the rest of the house.

You should ventilate the other rooms of your house during the day, so long as you are not creating a security risk. A lot of more modern windows will allow you to lock them shut with a slight gap.

Keep things dry! Dry down the surfaces you can get to (like windows) in the morning and particularly your bathroom after that nice hot shower. That water left all over your bathroom floor will evaporate into the household air so you need to dry those spills up yourself.

Don't dry your towels or clothes on radiators, even though this can be very tempting to do. After all, who doesn't like "radiator pants" on a cold frosty morning, but the moisture from your clothing has to go somewhere. You should also be careful if you tumble dry, make sure your machine vents to outside the house or has an inbuilt condenser.

The temperature of your home is also important; insulate your walls and attic to keep the house warm. Try not to unevenly heat up your house, if you only heat up the room you are using for instance then you could be making the condensation worse in the colder rooms. A bit more expensive, yes, but probably less expensive than replacing crumbling walls, mildew ridden clothes and aggravating any lung conditions.

If you are a tenant then remember, part of your responsibility as a tenant is to maintain the property to an acceptable standard. If you've let the walls of your home become blackened like something out of a Japanese horror movie then you can kiss good-bye to your deposit and you may even find yourself evicted so the landlord can nuke the walls from orbit and gets things redecorated.

Argh! Too late, I've got mould on the walls! What should I do now?

Whilst it may be tempting to invest in a flamethrower and burn everything down you should instead pick up some mould remover and spray it on the walls and then wipe the walls down with a damp cloth. Remember, mould sprays are highly toxic so make sure the work area is well ventilated and you wear safety equipment like gloves, goggles and a face mask.

You should avoid scrubbing the walls as this can release mould spores which can spread or reactivate the mould you have cleared away. Also, remember the mould loves damps places and the inside of your lungs are a nice damp place to set up a new home.

Ultimately, whilst cleaning your walls will get rid of the mould you will need to get to the root of the problem (e.g. condensation) or otherwise the mould will return like a cheap horror movie bad guy. You can use things like anti-fungicidal paint but prevention is the best way to stop the mould coming back.

I've always kept my property well ventilated and I've still getting mould on the walls, what gives?

Condensation is not the only potential culprit in your mould war, just the most likely one. Remember, mould likes damp conditions so you could be suffering from a leak within the walls, your guttering could be allowing rain penetration or loose tiles could be letting water in. You may need to get an expert in if this is the case or, if you’re a tenant, then it maybe time to call the landlord.

Could it be rising damp?

Rising damp is caused by moisture from the ground seeping up into the walls. This is one of the worst causes of dampness in your house to have but also a rarer form. If you suspect you have this then ideally you'll need to hire a contractor (or have your landlord do it) to employ a damp proof course.

You can read more about mould, damp prevention and condensation here: